The benefits of using Biochar in your home garden 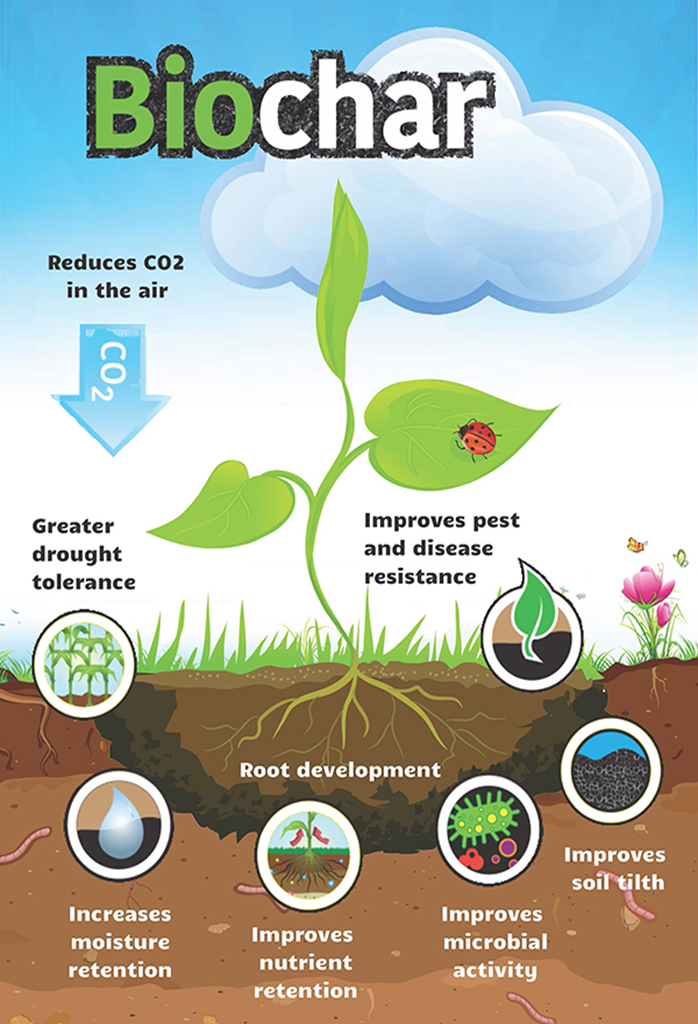 Biochar is suitable for organic use, as a soil conditioner. Biochar is a stable solid that is rich in carbon and can endure in soil for thousands of years. it revitalizes soil by:

The Benefits of using Biochar in your compost:

In New Zealand it is not common practice to use Biochar as an animal feed supplement, but we have been looking at studies from overseas and their results are encouraging. Adding supplements such as organic minerals, amino acids, fatty acids, antibiotics, and vitamins to feeds is common in livestock farming to improve immunity, protein intake, growth and performance and for the productivity of animals. In Europe 90% of the produced biochar is used in animal husbandry. Several studies have shown that introducing Biochar to feed can increase weight and feed uptake, enhance animal health, benefit nutrient uptake, aid the detoxification of contaminates, pollutants and other toxins in feed, reduce antibiotic resistance and reduce methane emissions.

Using Biochar as a food supplement also has the flow on effect on soil conditions as it passes through the animal in the dung and back onto the pasture. Biochar can improve the soils health and fertility, by better soil moisture retention, increased aggregate stability, enhanced nutrient content, and increased microbial habitat. Improvements in soil quality naturally flow onto productivity increases. Biochar additions have been demonstrated to increase crop yields. Some studies have also found that methane emissions are reduced from soils containing Biochar, however the research is not conclusive yet given the complex nature of the studies.

One of the leading advocates for biochar in Australia has been using Biochar as an animal feed supplement since 2009. He feeds his cattle at a self-regulated rate of around 300 grams per day, initially introducing it with molasses to attract the cows. The cattle then subsequently provide an effective delivery system, not reliant on tractors machinery or labor, which further enhanced by dung beetles incorporate biochar dung rapidly and deeply into the soil profile, which has led to better legume growth in his pasture and fatter and healthier cattle, which now means he has been able to stop feeding hay and other fodder to his cows, applying fertilizer to his pastures, spraying insecticides thus improving his farms economics significantly.